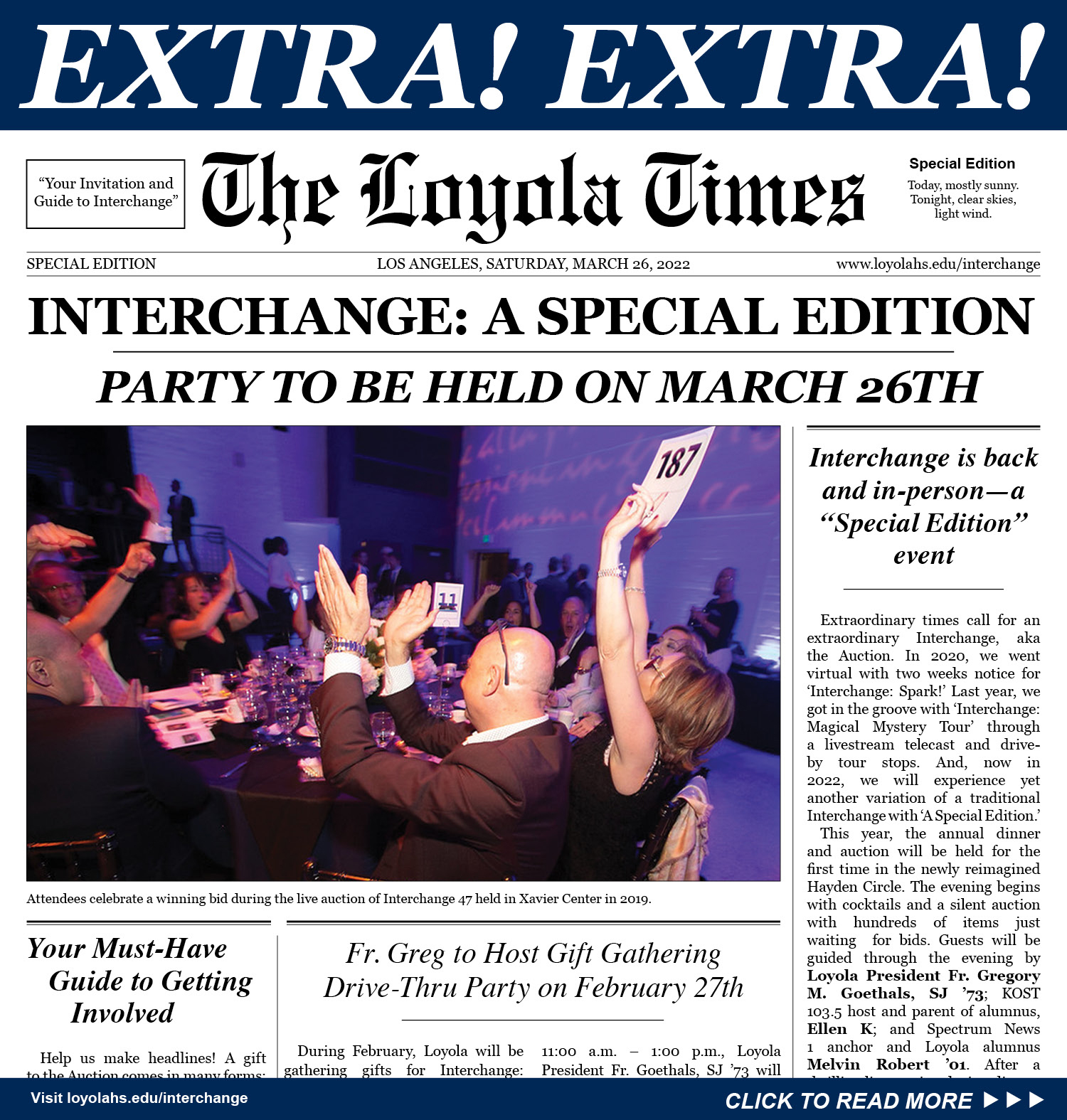 On March 26th, Interchange is back and in-person—the “Special Edition” event.

Extraordinary times call for an extraordinary Interchange. In 2020, we went virtual with two weeks notice for ‘Interchange: Spark!’ Last year, we got in the groove with ‘Interchange: Magical Mystery Tour’ through a livestream telecast and drive-by tour stops. And, now in 2022, we will experience yet another variation of a traditional Interchange with ‘A Special Edition.’

Learn how to us Bidpal here:

We rely on your support!
Donations of auction items, cash donations or sponsorships
gratefully accepted.

Interchange is crucial to the mission of Loyola. The proceeds from this evening fund additional scholarships for almost 30 percent of the students who would otherwise be unable to attend Loyola.  Be part of this extraordinary event—Interchange: Special Edition.  Loyola is waiting for you.

Scroll down for more information or

Click on the image below to view your invitation: 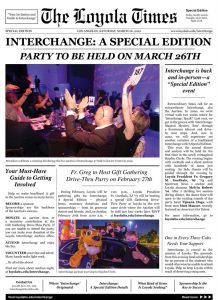 The Interchange Auction is Loyola High School’s largest annual social event and the MOST IMPORTANT school fundraiser of the year.

Why is it called Interchange?

In the fall of 1972, Fr. Patrick Cahalan, SJ, Loyola’s president at the time, proposed replacing the annual raffle and ticket drive with a spring gala auction. He called it “Interchange” because he believed the term was reflective of both Loyola’s location and its student body. Based in the heart of Los Angeles, Loyola is the “interchange” where people from every socio-economic, cultural and geographic corner meet to celebrate the contributions of our past, current and future Cubs. Members of our student body come from almost 200 zip codes in the greater Los Angeles area each  day.

Why do we need Interchange?

The funds raised from Interchange are crucial to the mission of Loyola. In keeping with the vision of St. Ignatius to make education accessible to all students, Loyola underwrites a quarter of all tuition costs and provides additional financial aid for almost 30 percent of the student population. The proceeds from Interchange fund scholarships for those students who would be unable to attend Loyola. It is because of Interchange that Loyola is able to keep tuition within the reach of so many young men deserving of the transformative power of a Jesuit education.

Who participates in Interchange?

The entire Loyola Community–including current and past parents, students and alumni, faculty and staff– join in support of Interchange. There are many different ways to be a part of this tremendous effort.

The event usually takes place in March. This year, Interchange will be held on Saturday, March 26, 2022.

What happens at the Interchange?

The evening begins with cocktails and hors d’oeuvres where hundreds of silent auction items are on display. Guests are invited to bid on the items they see there – which range from exotic getaways to fine wines and one-of-a-kind Cub memorabilia. The party then moves on to a gourmet dinner and the nail-biting, heart-thumping Live Auction, followed by live music and dancing.

What happens before Interchange?

The Interchange “season”—the period of time it takes to prepare and organize for the gala – begins at the end of January when the Interchange office on the Loyola campus officially opens. Over the following weeks, auction items are solicited to be gathered at a special Gift Gathering Drive-Thru on Sunday, February 27th. Back at the office, volunteers work tirelessly to prepare for the big event. We have volunteer teams in sponsorships, advertising, gift procurement, marketing, catalog, decor, and data entry. We are always looking for writers, copy editors, graphic designers, and photographers. Anyone who is willing to lend a helping hand is welcome.

What is the Gift Gathering Drive-Thru Party ?

Traditionally, Loyola holds multiple “Gift Gathering Parties” throughout the city at the home of a generous host family as a way to build excitement for gala night. It is a casual get-together where the Interchange team literally gathers the gift items that are to be put up for bid in the March auction. For this year’s Special Edition, Fr. Goethals, SJ will be hosting a Gift Gathering Drive-Thru Party on Sunday, February 27th from 11:00 a.m. – 1:00 p.m. If you are unable to attend on the 27th, we would be happy to accept your gift at any time that is convenient for you. Please contact the auction office at 213.381.5121 x1915 or interchange@loyolahs.edu to make arrangements.

We are gratefully accepting item donations. If you would like to donate an item, please let us know as soon as possible to be listed in the online auction catalog.

What can I bring to the Gift Gathering Drive-Thru Party?

A gift to the Auction comes in many forms:

…or all of the above!

Didn’t make it to the Gift Gathering Party?

No problem! Feel free to leave your donation with Security during business hours.
Just attach the confirmation email received after donating online or
complete the printable donation form here.

Want to contribute but aren’t sure what to give?

Consider a cash donation. If your donation is used to supplement the auction,
you will be listed as a donor. Please give now.

What Kind of Items Are You Looking for?

We ask for unique items to make the live and silent auctions interesting and successful. Be creative. Sometimes it’s not what you have, but who you know! Perhaps you know someone who has a unique talent or experience to offer. Here are some types of gifts—not in any particular order—that tend to attract the most bids:

We are gratefully accepting item donations until this Friday, March 18, 2022.

Due to storage, display and delivery challenges, we no longer accept donations of furniture.

Monetary gifts are very much appreciated.

All those who donate a cash gift will be listed in our evening program.

To donate a monetary gift, please scroll down and complete the form below.

MYTH: Interchange is just one night.

FACT: While the event is held on one evening, Interchange is a season includes a gift gathering drive-thru party and fun opportunities to volunteer for the entire month before Interchange.

MYTH: My donation is too small to really make a difference.

FACT: EVERY donation is IMPORTANT. It is only through our combined generosity that Interchange succeeds.

MYTH: Interchange is only for current parents.

FACT: Anyone can go to Interchange–current parents, past parents, friends, alumni, community members all attend Interchange.

MYTH: I shouldn’t attend the Gift Gathering Party if I am not planning to attend the Auction itself.

FACT: Everyone who is able should attend the gift gathering drive-thru party. It’s a fun way to visit campus, get a blessing from Fr. Goethals, SJ, and a much-needed source of auction items.

MYTH: Volunteering for Interchange is a full-time job.

FACT: There are many ways to be involved. You can help for an hour or two during the month before the event, or become a member of one of our teams. As a volunteer you will meet and work with current and alumni parents from all over Los Angeles. You’ll get to know the Loyola staff, and you will be invited to join our President, Father Greg, at our volunteer lunch.

MYTH: Volunteering is only for current moms.

FACT: Everyone is welcome to volunteer. Many parents come back year after year to volunteer and connect with old friends.

MYTH: The Auction is only for large donors.

FACT: The Auction is for anyone who would like to participate. There are many silent auction items to bid on–in all price ranges.

Thank you for your interest in Interchange.