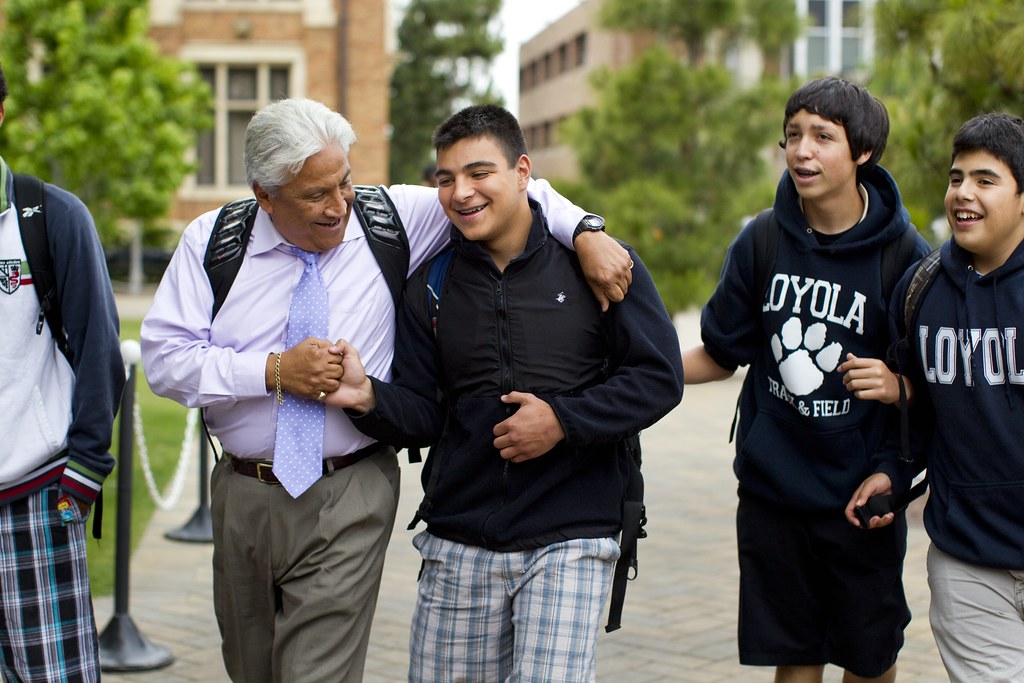 Loyola High School is named in honor of St. Ignatius of Loyola, who founded the Jesuits in the sixteenth century.

Located near downtown Los Angeles, Loyola is the city’s oldest high school and as such, welcomes and is committed to educating and serving students from throughout the greater Los Angeles area.

In its racial, economic and ethnic diversity, Loyola’s community mirrors the diversity of our city. Although we embrace and are enriched by students from other religious traditions, Loyola shares primarily in the educational mission of the Catholic Church as its highest priority.

Loyola is founded on the vision of St. Ignatius as expressed in his Spiritual Exercises, and on the tradition of the Jesuit system of education begun in 1548. It is a learning system based on discipline, order, clear goals and objectives as well as the paramount importance of self-direction.

The core of the Ignatian vision is faith in the Risen Lord Jesus. This translates into a uniquely Christian spirit of loving service to God and one’s neighbor. This service does not count the cost or reward, but is done out of love. The Ignatian vision teaches one to find God in all things, and that the things of God are the bedrock of all learning and order.

All of us at Loyola strive to create a Christian community in which the Ignatian vision is planted and nurtured. A community where young men are able to develop their talents and personal uniqueness as well as learn to conduct themselves with professional inquiry, mutual trust, respect for the individual and loving Christian charity.

We strive to build a community where our youthful charges teem with potential for goodness, joyful enthusiasm and a hunger for justice, truth and beauty. A community where students develop a profound appreciation for independent, critical judgment and creative expression.

Believing that God is active in all creation and human history, our Jesuit teachings seek a dialogue between faith and culture. Our students are encouraged to experience a variety of peoples so as to develop a genuine appreciation of God’s presence within the entire world family.

The Ignatian vision seeks to create young men of action, to instill in them the wisdom to discern between individual rights and privileges and the obligation to the common good. This vision strives to mold an informed conscience and intellect, which can discreetly express an opinion based on fact and experience.

The Ignatian vision also commits Loyola to excellence in every endeavor and to the education and development of the whole person.

This is why Loyola challenges its students with an exceptional academic curriculum, premier athletic programs, profound religious experiences and challenging co-curricular activities and clubs. Our young men are prepared thoroughly for future studies at the collegiate and graduate level.

Finally, Loyola is committed to developing young men who will put their beliefs and faith into practice throughout their lives. We are committed to educating “Men for and with Others.” Men who will take their place as leaders and agents of change in civic and ecclesial communities. Men who will respond to the call of Christ to be of service to their communities. Men who will be known by their compassion, integrity, honesty, loyalty, religious devotion and moral courage. Loyola graduates will serve with faith, inspire hope in others and love not just in words, but in deeds.

Prioritization of Goals and Objectives Derived from the Philosophy

Loyola High School’s philosophy is defined by a synergistic, three-fold mission: spiritual, academic and co-curricular. Each aspect is distinct from the others, but united to the three-fold mission. Each aspect strengthens the whole, while remaining separate. This philosophy guides our school to prepare young men in conscience and intellect, through wisdom and action, to become “Men for and with Others.” They serve unselfishly so the universal goals of goodness, truth and justice may be shared in the world.

Loyola defines itself as a Jesuit college preparatory school. It is the word “Jesuit” that emphasizes the preeminent aspect of our school’s philosophy. The basis of our three-fold mission is a spiritual foundation, rooted in the faith of the Risen Lord Jesus, which guides us to serve God and humanity.

Our Christian community of Loyola gives our students witness to this Ignatian vision of spirituality and its mission: to awaken the conscience, and guide the intellect for all, so as to be of service.

Next in importance, but dependent on the whole for its integrity, is the Loyola academic mission. As the spiritual mission defines what is just, good and true, the academic mission develops the ability of the student to create an informed intellect from knowledge. An informed intellect enables a Loyola student to encounter the problems, choices and challenges of the modern world. A student’s ability to make decisions, foster changes and define the limits that lead to the common good evolves directly from his spiritual awareness and informed intellect. Excellence of the mind, in union with an awakened conscience, enables a student to progress toward his ultimate potential: to be a “Man for and with Others.”

The final aspect of the three-part mission is the co-curricular component. Through a variety of athletics and activities, our students learn to translate their personal visions, goals and desires into action to benefit themselves and others. Courage of self develops when a student’s actions are visible and viable, rooted in his conscience to become evident and nourished by his developed abilities.

A “Man for and with Others” is the result of this three-fold mission of spiritual, academic and co-curricular goals and objectives. Inspired by his awakened conscience, trained by his developed intellect, and armed by his courage of self, he is prepared to serve others with goodness, truth and justice.