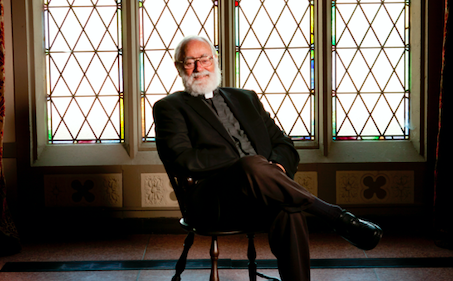 Beloved former Loyola teacher and Jesuit Fr. James A. Rude, SJ ’50 passed away on March 5, 2020 at Sacred Heart Jesuit Center, Los Gatos, California. He was 86 years old and would have celebrated his 70th anniversary as a Jesuit later this year. Please click here for Fr. Jim Rude’s eulogy by his nephew, Steven Rude ’83.

“Early on in his priesthood at Loyola, Fr. Rude decided that his vocation was not about happiness for himself, rather happiness for others. And that is how our social justice program began in 1967, with the ultimate goal of inspiring our students to be Men for Others,” said Loyola President Fr. Gregory M. Goethals, SJ ’73. “Since then Jim’s ministry took him to county jails, federal prisons, homeless shelters, AIDS wards and death row. Whether working as a pastor or on the frontlines battling today’s social ills, Jim continued to change our world on a daily basis. He was a prophet here at Loyola and a saint—sometimes causing controversy—but that was good.  As I told him, of all the people responsible for my vocation, he was the catalyst for it. He is dearly missed by all.”

During his tenure as an instructor at Loyola from 1967-1978, Fr. Rude started the Christian Action Movement (CAM), mentoring future Jesuits such as Fr. Greg Boyle, SJ ’72 and establishing the model for what is now Loyola’s community service program. In 2011, he was awarded Loyola High School’s Cahalan Award which is presented annually to outstanding alumni who embody the spirit of the magi.

His life’s work took him to county jails and federal prisons as far away as Hawaii as well as to local parishes such as Blessed Sacrament and Dolores Mission.  He was most recently based in Fresno, CA at four different parishes where he taught theology to lay ministers; was the director of the Social Justice Ministry; worked with the homeless and against the death penalty; volunteered at four different state prisons; and worked as co-editor of the diocesan newspaper, Catholic Life.

A celebration of Fr. James Rude SJ’s life will be held at his alma mater, Loyola High School of Los Angeles, and will be announced in the coming month.